We’ve come across the most romantic of wedding stories, the most fairy-tale like engagement celebrations, and the most coveted marriage ceremonies that have had us ooh-ing and aah-ing for days on end! Being a wedding publication, we’ve glimpsed through spectacular pictures and glossy photographs of the many myriad venues and the even more myriad cakes and dresses (and of course, the happy bride and groom), as well as being one of the first on the scenes of the wedding tales we’ve narrated in our previous issues.

How would you describe your wedding day?
Reia: Fun filled full of love and happiness.
Garrie: Memorable, unforgettable, with lots of bonding and love.

Did we want to repeat that this time? Of course! Did we want to be different? Absolutely. So what did we end up with?
Little did we know that we’d end up stumbling upon an utterly heart-warming marriage proposal featuring in the love story of a dentist and a physiotherapist: Garrie Godfrey Christopher Rao, and his lovely wife, Reia Dsouza!

Thoroughly enjoyable for all our readers, this wedding story is as much of a joy to read as it is to witness through the pictures!

First things first, tell us about yourself and how you first met.
Garrie: Well, I am a dentist by profession and have been practicing in Australia. Reia is a physiotherapist based in Muscat. Neither of us knew one another and our very first meeting took place in Dubai. Actually I was travelling to India via Dubai; the flight was to take a transit. I was never a marriage material type of guy. Our parents had however already communicated and planned to meet at the Dubai airport. We hadn’t spoken a lot; basically we didn’t know one another very much.

So your parents knew one another then.
Reia: Yes. It was only our parents who were on talking terms for quite a while. We didn’t know what they had up their sleeve! Garrie and I had spoken only once before meeting at the airport, and it was a formal conversation. He boarded his flight on Tuesday and met me on Wednesday. This was the first time he was meeting me, and the second time we spoke.

Garrie: I met Reia and her family at the airport thinking that this was just going to be a routine catch up. I saw Reia and her mother waiting for me; I sat next to Reia’s mother and we bonded very well and spoke a lot. Reia on the other hand simply kept sitting there (laughs).

Reia: Garrie and I were facing one another and my mother was sitting beside him; they kept talking. They went on and on and on! I was paying more attention to my breakfast. Then my mother got up saying that both of you should talk to one another and left.
Garrie: It was very comfortable talking with her, we learnt about one another’s interests and hobbies.

Reia: Later we went to the Dubai Mall and visited the aquarium to see all the fish!

Garrie: After which we walked on the beach together. It was very romantic. I had to head back to the airport then; I knew that it was time to leave, but this was definitely the beginning of something. I promised her that I would see her again in two months.

How did the proposal take place?
Reia: We kept in touch after he’d left for India; but he came here in less than four weeks on the pretext of meeting my father and brother. He had just met my mother till now. He asked me to come meet him the following day at 6 in the morning at the Al Bustan Palace Hotel where he was staying. I thought to myself, ‘Oh my God, 6 in the morning! That’s too early!’

Garrie: (laughing) Anyone who knows Reia knows she doesn’t like waking up early.

Reia: My mother was like, ‘Oh come on, he’s asking you to come, just go’; she wanted me to dress in something fancy because she knew (laughs)! I went, thinking that we’ll probably watch the sunrise together. He was waiting for me there. One thing about Garrie is that he is always dressed up; he always has a blazer on, so it didn’t strike me odd that he was wearing one at that hour as well.

There was absolutely no one around, no one

in sight.Garrie: The thing was that I had come to Muscat for a short 3-day business trip, and since I was booked through all the days, this timing was perfect. I requested the Al Bustan Palace, a Ritz- Carlton Hotel late at night to give us privacy the following morning; that’s why no one was around. The hotel staff led me by torch light at 3 in the morning to find the perfect spot! Everything was in order by 5, and Reia was to arrive at 6.

Reia: I was completely clueless even till this moment! We walked together for a while after which he said, ‘Can I blindfold you?’ It still didn’t strike me! I agreed and he blindfolded me with the belt of his bathrobe because he had nothing else to use. He led me on and though I couldn’t see anything, I caught a tiny glimpse of a spot beautifully decorated for breakfast, so my initial thought was, ‘Oh! It’s going to be a romantic breakfast while watching the sunrise.’

Garrie: Which it did end up being later on!
Reia: He removed my blindfold and it all looked very pretty. We sat down and kept talking and then suddenly I saw him reach into his pocket and get down on one knee. My immediate reaction was to stand up, and after that I have no memory. I completely blanked out (laughs)! I don’t even know what he said! I don’t remember any of the words, all I recall is saying ‘Yes’.

Tell us about the pre-wedding ceremonies. Was it a traditional affair?
Reia: Yes it was. We followed the Goan Christian t

radition. We had the traditional Roce Ceremony before the big day; essentially it consists of anointing the bride and groom with coconut milk (Roce means coconut) to purify them in preparation of the wedding and the beginning of their married life. The couple can’t see one another or go outside the house till the wedding day after this ceremony is done.

Garrie: Whoever pours the coconut milk is supposed to put money into a pot after which it goes to the person who removed the coconut, or to the needy. We had the ceremony together with Reia’s bridesmaids and my groomsmen. They also cracked eggs! The wedding was held at the Ruwi Church, and the reception was at the Al Bustan Palace Hotel. 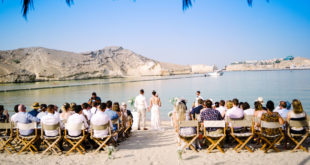